The Chimes is the second in Dickens's series of Christmas books, with as powerful a punch now as it had at the time. We toured this in the run-up to Christmas 2014, but have plans to bring it back in 2016.

Trotty Veck is a ticket-porter – a man who fetches and carries packages, letters and deliveries for a small sixpence here and there. He doesn’t have much but he is happy, gentle and lives a simple, obedient life.

In the run-up to the festive season Trotty falls asleep after a long day’s carrying and delivering. Woken by the church bells, The Chimes, and then summoned up the tower by their mysterious power, he has just one chance to change this world… but will he listen to the bells?

The Chimes is a Victorian It’s a Wonderful Life filled with all of the master story-teller’s colourful characters and heart-rending poignancy.

Fresh from successful adaptations of She Stoops to Conquer and A Christmas Carol, Lighthouse Theatre brings their signature style to this classic by the most theatrical of authors. With a company of five, carols, music and – of course – bells!…this show is sure to be fast and funny, inventive and entertaining; but most of all a Christmas treat to reinforce the message of this festive time of the year…

Recommended for ages 10 and above.

The Chimes by Charles Dickens

Adapted and directed by Derek Cobley for Lighthouse Theatre Company

The Chimes is the second in a series of festive stories by Charles Dickens, not as well-known as its predecessor A Christmas Carol but an equally powerful comment on the human condition, a so-called ‘blow for the poor’ which has a surprisingly strong resonance today. Lighthouse Theatre Company’s new touring version of the tale is highly enjoyable family entertainment with dynamic, fluid staging by Derek Cobley and a truly epic feel that is rich in theatrical texture.

Roger Delves-Broughton is a joy as the central character Trotty Veck, a hapless ticket-porter whose supernatural encounter with the spirits of the bell tower beneath which he works propels him on a journey of self-discovery that is portrayed with a sublimely articulate physicality and hugely engaging pathos. Adrian Metcalfe and Sonia Beck present a skilfully-crafted rogues’ gallery of Trotty’s pompous ‘betters’ in society with laugh-out-loud humour and deep humanity. Huw Novelli brings dignity and presence to the role of a convicted man whom society punishes even further for his attempts to make amends, while Non Haf’s fragile warmth and Douglas Gray’s bright-eyed charm complete this confident and finely-tuned ensemble.

The production was very enthusiastically received here in Pontardawe and is well-deserving of a wider audience. It continues to tour to venues throughout Wales until December 18th.

It makes a refreshing change to see a Dickens piece that I am not familiar with. A Christmas Carol, Great Expectations and Oliver Twist do the rounds at this time of year. It is also refreshing to see that a company from Swansea has had the audacity to not do a Dylan Thomas play this year (although a quick look at the company’s website indicates that A Child’s Christmas in Wales is also touring over the next few days, so everybody has to compromise I suppose).

Film companies have immense entourages. Lighthouse’s company of actors (four men and two women) also doubled as programme sellers, and after the show, the actors immediately began dismantling their set. This gave the show a delightfully impromptu informality, as through the piece was an extemporised Christmas entertainment. Clearly however, this was a dramatic conceit – the elegance of the actors’ interactions as they became different characters, became each other’s dressers and props’ masters and mistresses indicated that this was a play that required a great deal of thought and careful planning to conceal its apparent simplicity. The play was extremely well acted. Roger Delves Broughton conveyed Trotty Veck’s simplicity and bewilderment with particular charm – he is bent almost double with subservience and fear at the edge of the stage when he visits Sir Joseph Bowley (Member of Parliament). Adrian Metcalfe is clearly enjoying himself in his trio of roles as the self-important Alderman Cute, the louche Sir Joseph Bowley (Member of Parliament – a phrase gloated over with a delightful grimace to the audience) and Tugby. A particular standout moment for me was when Widow Chickenstalker was recounting to Tugby the sad story of what happened to Richard. These two comic characters are centre stage, but behind them – in one sense offstage and yet the focus of attention was the statue-like Douglas Grey, who played Richard, cloaked in black with only his face and hands on display – a very poignant image of the ghost of what was once a good person.

Without wishing to spoil the plot, this play concerns a porter Toby (Trotty) Veck, whose daughter is about to be married. Unlike some of Dickens’ other work, where the Scrooges and the Sikeses are readily identifiable as the villains, Trotty Veck is a good man, and a likeable character. So why is he visited by the mysterious chimes of the church bells, who like Scrooge’s ghosts show him a grim future. Trotty Veck believes that people are bad. He believes what he reads in the papers about poor people being nothing but trouble. He believes Alderman Cute who believes that such people should be put down. He believes Sir Joseph Bowley ( Member of Parliament) who is a great advocate for the prison system. He believes this because that is all he is told.

There is a great deal of social commentary in this piece – Cute and Bowley’s sentiments echo many of the sentiments of contemporary politicians and press commentators. However, there is also a great deal of hope and the importance of not crushing those hopes. This is A Christmas Carol without the melodrama and the Victorian mawkishness of Tiny Tim. I’m with Victoria Wood there I’m afraid – “Couldn’t stand Tiny Tim. He were a pain in the bum.”

All in all, a thoroughly enjoyable production, and no bah humbug – an ideal Christmas entertainment (there are even carols at the end, and some of the audience members were joining in with enthusiasm). 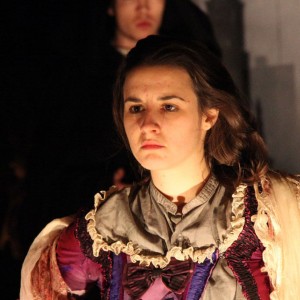 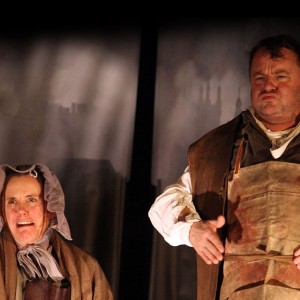