Lighthouse Theatre is a touring theatre company, run by co-directors Sonia Beck and Adrian Metcalfe. Lighthouse is dedicated to producing character-driven interpretations of classic texts, screenplays and new writing for audiences not commonly associated with mainstream theatre, as well as for a more traditional theatre audiences.

We tour to village halls, community centres, and mid scale theatres, and have produced works by Noel Coward, Dylan Thomas, Charles Dickens, Shakespeare as well as original writing, developing a reputation for excellence in the locality and beyond.

In association with Swansea Arts and Education, we have developed projects in both primary and secondary schools within South Wales, and work to nurture those relationships. Working at the heart of our community we recently wrote and performed a promenade production based on the artist Josef Herman and his time in Ystradgynlais entitled Joe Bach, as part of the Josef Herman Foundation Schools Award. Other site-specific performances include a piece of local history on bicycles entitled ‘Life Cycle Of The Bay‘, and a promenade performance of Return Journey by Dylan Thomas, taking the same route as the author on his return to his blitzed home-town. Developed in association with the DT100 programme of events and Literature Wales, this performance tour played to near capacity audiences and attracted considerable critical acclaim.

Operating predominantly in Wales, but touring widely, we have taken shows as far afield as the rural communities of North Yorkshire. In 2011, our three-person adaptation of Noel Coward’s Still Life toured to Montevideo, Buenos Aires and Patagonia. We received a Wales Arts International grant to return in both 2013 and 2015; and we continue to foster our links with the artistic communities in Latin America.

We continue to attract an audience with a wide age range and field of interest nationally, but we remain firmly rooted in our home base, offering quality theatre in arts spaces as well as spoken word in local pubs and community centres. 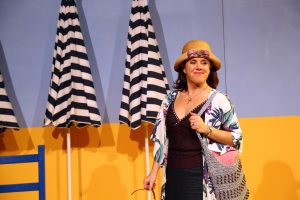 Sonia trained at the Arts Educational Schools, London. Her recent work includes the role of Carmen in the premiere of Hell’s Bells by Lynne Truss at the Pleasance Theatre. Other leading roles include Stevie in Barkin’ by Frank Vickery (Grassroots); Edith Piaf in Piaf (Swansea Grand); Shirley Valentine and An Inspector Calls Back (Cheltenham Everyman); Murder On Air (Bill Kenwright Ltd); Present Laughter (Ian Dickens Productions) She has toured nationally for Compass Theatre, North Country Theatre, Forest Forge and Oxfordshire Touring amongst others, as well as main house Shakespeare seasons for Vienna’s English Theatre. Film roles include Fran in Shelter (Edge Picture Co); WPC Jones in The Golden Years and Kristina in Jawbone (UME8). Sonia is co-director of Lighthouse Theatre with whom she recently toured South America with She Stoops to Conquer. in 2016 she toured nationally in Willy Russell’s Shirley Valentine for Ligthouse Theatre. 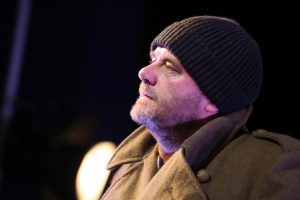 Adrian’s first job was appearing as Sinbad Sailors in Under Milk Wood in London directed by Sir Anthony Hopkins at the age of nineteen. Since then he has enjoyed a career in repertory He has played Henry V, Claudio and Octavian for Wales Actors’ Co., Bottom, Macduff, Fluellen and Dogberry for Tour de Force Theatre Co., and Turner, Brother Wormwood and Baines for North Country Theatre. Television credits include The Dom Joly Show (The Comedy Channel), Mor-Ladron (S4C) and Pirates (Discovery). He played Stephen Carter in Hercule Poirot’s Yellow Iris for Bill Kenwright’s Agatha Christie Theatre Company.Last year he completed a lengthy season with Theatre by the Lake playing Nick in Bedroom Farce, Polignac in Dry Rot and Pumblechook in Great Expectations. He appeared as Dylan Thomas for Literature Wales as part of their centenary celebration in 2014. He has recently finished filming Decline and Fall for the BBC and will be working with Robert Pugh on the new film project, Chariot.