In conjunction with the City and County of Swansea's Education Advisory Service, Ty Cerdd and Arts Council Wales, we are presenting Stuart Fortey's funny and poignant tale about Wilfred Owen's last few days in Britain before being sent back to the front in 1917. On tour throughout Wales in May 2019. 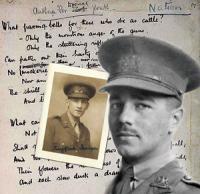 Wilfred Owen, recovering from shell-shock, comes face to face with Lieutenant-Colonel Gray in a Scarborough Hotel – both facing their own unspeakable demons far away from the trenches

Marking the centenary of the start World War One, Lighthouse Theatre present this touching piece about two minds meeting in the most of devastating circumstances.

‘The two main actors were exceptional and really brought the horrors of World War One to life.’

TripAdvisor Comments after show in The Grand

‘A very impressive and memorable performance – a truly fitting tribute’

Review of On Scarborough Front from a performance at the The Grand Theatre, Arts Wing on November 8th, 2014

Centennial commemorations of the commencement of the First World War in 2014 have become almost a national industry, and their ubiquity has sometimes resulted in a lack of sincerity and meaning. This sense of commemorative overload made the contrasting integrity of Lighthouse Theatre’s timely production of Stuart Fortey’s On Scarborough Front shine out at the Swansea Grand’s Arts Wing performance on the Saturday before Remembrance Sunday.

At a time when an audience might think there was nothing more to be said about the ‘war’ poet Wilfred Owen, or the individual’s willing participation in the conflict, the choice of Fortey’s new play brought a moving psychological illumination to a period whose mores a 21st century struggles with. The superbly crafted performances from Huw Novelli (Wilfred Owen) and Adrian Metcalfe (Lieutenant-Colonel Gray) under the pin-sharp direction of Sonia Beck unwrapped the complexities of national pride and duty intermixed with fear and incredulity at the horrors witnessed and related.

The truthfulness of the performances, as Owen (Novelli) negotiated the territory between functioning as an officer/soldier and as a witness through his poetry, contrasted keenly with Gray’s (Metcalfe’s) struggle to subdue his guilt and anxiety beneath a brusque façade of discipline. The emerging relationship and reflected humanity between the two men as they sought to reach their individual resolutions made for a deeply affecting theatrical experience.

The simplicity of the production as a foil to the complexities of the play’s emotional content was enhanced with the use of Andrew Griffiths’ searing soundscape to echo the hell of war. In the breadth of its historic content, this production warrants a longer life, not only as a powerful theatrical experience but it would be invaluable as a contribution to theatre in education. 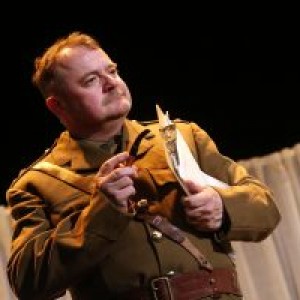 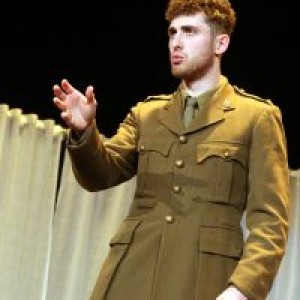